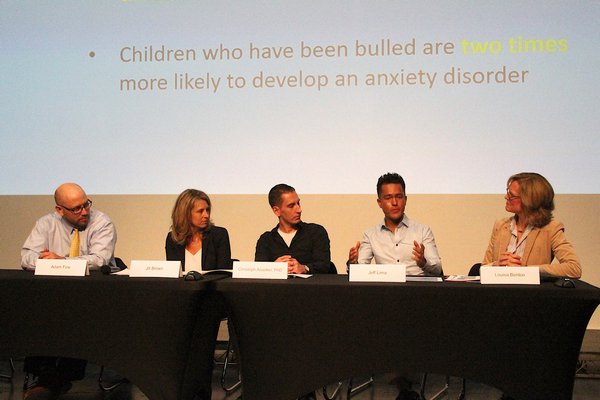 The East Hampton High School community mourned the loss of David H. Hernandez, a 16-year-old junior, in September 2012. The East Hampton teenager’s suicide—which family members said was a result of bullying—was the catalyst for improving mental health outreach at the school, and in the community.

At the time of the teenager’s suicide, the Family Service League was one of the only counseling services in town that took health insurance—and it had a three-month waiting list for new patients.

In the first three years of the initiative, the state granted Suffolk County $30,000, the towns of Southampton and East Hampton over $150,000, and the local school districts over $100,000 to improve mental health services. In addition, East Hampton Town now contributes $27,500 each year to fund the Family Service League and enhance its services.

Against that background, dozens of teenagers attended a forum on cyberbullying and mental health last week that was hosted by LTV Studios in Wainscott in partnership with the East Hampton School District and East Hampton Town. “Cyberbullying and Mental Health” was one in a series of forums on mental health, bullying, drug use and other current issues with community members, and experts.

Louisa Benton, executive director of Hope for Depression Research Foundation, a nonprofit dedicated to fighting depression through research and education, told the story of Angelo Collazo, 17, of Hicksville, who recently committed suicide. His family learned after his death of the bullying he had endured on a daily basis, with name-calling beginning in elementary school, and then following him to high school.

Ms. Benton added that Nigel Shelby, a ninth-grader from Alabama, was in the newspapers recently for taking his own life after being physically and emotionally bullied in school for being gay. That bullying followed him home through social media and text messages.

“Cyberbullying is now a 24/7 phenomenon that kids are being exposed to without any sense of control over it,” Ms. Benton told the audience. “In the last decade, we’re seeing a rise in teen depression and suicide.”

Mr. Fine agreed, saying that the East Hampton School District is seeing less traditional bullying, “Now, at our school, 95 percent of the incidents are occurring via Snapchat and text message,” he said. The fact that it can occur at any time of day creates a whole new level of challenge, the principal said.

He added that bullying can have long-lasting effects—including depression, anxiety and other mental health problems.

According to Christoph Anacker, Ph.D., an assistant professor of neurobiology at Columbia University, another speaker at the forum, bullying can severely damage the brain. “Bullying can actually cause the body to produce very high levels of toxic stress hormones,” he explained. “The hormones can kill brain cells and change the way the brain cells talk to each other.”

Toxic stress hormones act on brain regions involved with mood, learning and memory, and that controls people’s ability to think and function properly, especially at a young age, according to Mr. Anacker.

New York State’s Dignity for All Students Act was signed in 2012. The legislation holds students liable for making negative comments, whether in person, on paper or through the internet, about a student’s race, color, weight, ethnicity, religion, religious practices, disabilities, sexual orientation, gender or sex.

Because of the Dignity for All act, Mr. Fine said, “you have to investigate each specific bullying situation when brought to your attention … you are bound by state regulations.”

The forum on Wednesday, May 8, was held as a conversation with the audience and students.

Max Eberle, an East Hampton High School student, wanted to know, “If someone is experiencing bullying, would you suggest home-schooling or online learning, or would that make the situation worse?”

Jill Brown, the founder of Generation Text Online, responded that in such a situation it would be wise to reach out to a trusted adult before making a decision to leave school permanently or resorting to online learning.

“You don’t ever want to be in a situation where you feel people aren’t protecting you,” she said, as it is the duty of teachers, administrators and other faculty to make sure each student feels safe in school. Mr. Fine added that a trusted adult doesn’t have to be a counselor or psychologist, but can also be a family friend, teacher or faculty member.

“You could tell kids to be nice all the time … but it’s giving them the necessary skills and resources to have somebody to talk to,” he said.

Although one in 10 U.S. adults experiences clinical depression annually, 50 percent of patients with major depression don’t respond to the medications commonly in use today, according to Ms. Benton, who added that there have been no major breakthroughs in the treatment of depression in more than 30 years.

“If so many folks are struggling with depression, why hasn’t there been a major breakthrough within the last 30 years?” asked East Hampton Town Councilwoman Kathee Burke-Gonzalez, who is a member of the South Fork Mental Health Initiative.

To many people’s surprise, Ms. Benton explained that antidepressants were actually discovered accidentally. Some of the first antidepressants were discovered in the 1950s by a company in Europe through its development of antihistamines. The doctors were testing the antihistamine products on asylum patients “found out it lifted the patients’ moods,” Ms. Benton said. She added that, at the time, the doctors didn’t fully understand how the drugs worked.

Then in 1985, funding went into research for depression and the first SSRI, selective serotonin reuptake inhibitor, such as Prozac, was introduced. Today, Ms. Benton explained, the government does not prioritize depression, although it is the number one cause of disability in the U.S.

“We need a vast commitment to research—much like in the 1970s, Nixon declared a war on cancer,” she said, noting that half a century later, cancer can be treated and is not necessarily a death sentence.

“We see depression now as needing that same kind of research investment,” Ms. Benton said. “It’s a very complicated organ,” she said of the human brain, “and there hasn’t been enough commitment.”

The national suicide prevention lifeline is 1-800-273-8255—or visit www.suicidepreventionlifeline.org.