The way in which people with mental illnesses are treated in the United States has changed dramatically since patients were shuffled off to insane asylums to spend the rest of their days, but many of those changes have left people who do need treatment in the lurch, with no professionals to turn to and no continuum of care.

Local mental health providers are beginning to change this trend, with Family Service League planning to open a new 24/7 crisis stabilization center in Hauppauge in the new year, a focus in the importance of peer interaction for people who are struggling with an acute mental health crisis, and with changes in thinking in health care that take a more holistic approach to human experience.

Psychiatrists, social workers and mental health center directors shared their thoughts on these new programs and ideas with the community in a forum on “Mental Health Matters” sponsored by the East End Mental Health Awareness Initiative and the League of Women Voters of the Hamptons at Stony Brook Southampton Hospital’s Parrish Memorial Hall Nov. 19.

The discussion began with a screening of a Fred Friendly Seminars video, “Minds on the Edge: Facing Mental Illness” about the challenges associated with getting people with mental illness to seek treatment, and the legal issues surrounding involuntary admission to a psychiatric hospital.

On Eastern Long Island, most emergency psychiatric admissions are done through Stony Brook University Hospital’s Comprehensive Psychiatric Emergency Program, known as CPEP, where prospective patients are taken for evaluation to determine if they need inpatient care. 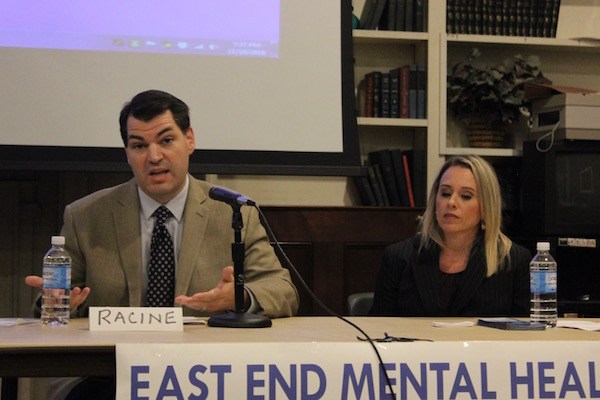 Dr. Christian Racine, a clinical psychologist who is the director of the Family Service League’s mental health clinics, told the crowd that 7,000 people were taken to CPEP in the last year, but 3,500 didn’t meet the criteria of being of “imminent risk” to themselves or others necessary for involuntary inpatient admission.

This is a critical place in the mental health framework, both here and across the country, where people who are suffering but not necessarily suicidal or violent often fall through the cracks. While patients who are released from an inpatient facility are required to have an outpatient appointment waiting for them within five days of release, without an initial inpatient admission, it can take weeks or even months to get appointments at Long Island’s overburdened mental health clinics.

This leaves many people who are desperate for care with a terrible choice: to wait it out at a time when they are in the midst of an acute crisis, or to do something dangerous to ensure they will be admitted to a hospital.

“The majority of the referrals to our clinics are coming from hospitals or emergency rooms,” said Dr. Racine. “We’re obligated to give discharge appointments within five days. That ties up a lot of our appointments, and it’s harder to see people coming from the communities, or from schools.”

Dr. Racine added that, due to this practice, people with chronic and severe psychiatric illnesses, like bipolar disorder or schizophrenia, are less likely to get treatment than someone who has an acute mental health crisis that makes a hospital admission decision an easier one.

Family Service League’s new Diagnostic, Assessment & Stabilization Hub, known as DASH, due to open by the beginning of 2019, is being designed to fill in this gap, allowing people of all ages to seek crisis intervention services, linking them to further treatment and support services in the community.

Dr. Martha Carlin, the director of the Long Island Field Office of the New York State Office of Mental Health, said she’s learned a lot over the past few years about what people who have learned to manage mental illnesses can give to people who are currently suffering.

“When you mentioned peer support 12 to 13 years ago, I would have been a skeptic, but they can be a tremendous asset,” she said. “Someone who has walked down the same road someone is on can be incredibly valuable.”

Dr. Carlin touted a relatively recent program, OnTrackNY, which is designed to help young people, ages 16 to 30, learn how to cope with the early symptoms of a psychiatric disorder.

“It’s a program that looks at the family as a whole, with peers and psychiatrists,” she said. “We’re not ordering a person to do a particular treatment. We’re collaborating with and engaging them.”

She added that the program also provides vocational and educational assistance.

More information is online at ontrackny.org.

Because many mentally ill people fall through the cracks in treatment, they’re far more likely to end up in the criminal justice system than under a doctor’s care.

Dr. Carlin said the state is also working on jail diversion programs allowing people who have been diagnosed with mental illness to clear up their criminal cases by getting treatment. She also said it is important to eliminate silos within state agencies, many of which are dealing with different aspects of society-wide issues.

“Many people we serve have co-occurring drug dependency,” she said. “That’s an area I think we need to look to.”

Suffolk County Department of Mental Health Adult Services Director Jenine Yannucciello is involved in many similar aspects of mental health, through the county’s Forensic Diversion Initiative, designed to give people with mental health and substance issues the care they need outside of the criminal justice system.

These programs sprang up in response to Kendra’s Law, a 1999 New York State law granting judges the authority to mandate psychiatric treatment, in response to an incident in which a man with untreated schizophrenia pushed Kendra Webdale in front of an oncoming N train in the New York City subway.

The law has proved controversial — with civil liberties groups arguing that it can scare people away from treatment, or that its enforcement could be racially or socioeconomically biased.

Ms. Yannucciello said she’s seen the use of Kendra’s Law “assist with the ability of individuals to live safely in the community, out of jail and in stable housing.”

“They’re sometimes expensive, they don’t taste good, and they’re always a constant reminder you have an illness,” he said. “Meds do affect cognitive functions.”

He added that, in some cases, courts can order patients to receive long-acting injections of anti-psychotic medications.

There’s been research that has shown that people with severe mental illness die 25 years earlier than people without mental illness. Dr. Garson said medication adherence could be a part of that puzzle too.

While Stony Brook Southampton Hospital is not licensed as a direct psychiatric treatment center (Eastern Long Island Hospital, in Greenport, which is also affiliated with Stony Brook does have inpatient psychiatric and substance abuse programs), Dr. Garson is in charge of an integrative health care program in Southampton, enabling his staff to diagnose alcoholism and help with early intervention for depression and anxiety, along with tele-health conference calls between doctors in Southampton, their patients, and psychiatric doctors at Stony Brook University Hospital’s main campus.

He said Stony Brook Southampton Hospital’s mental health services are also now being used in its emergency room, allowing them to “divert many patients who would end up going to Stony Brook.”

Dr. Garson said he doesn’t think it’s necessarily a bad thing that 50 percent of the people who go to CPEP for evaluation are sent home, but “we need to make sure that 50 percent get treatment.”

He added that the Family Service League has been very helpful with getting patients who leave Stony Brook Southampton Hospital’s emergency room with a psychiatric diagnosis into outpatient care quickly.

“They honor us as if we were a psychiatric facility. We’re pretty lucky,” he said.

Families of people with mental illness also need support, and there are several support groups on the South Fork, including one that meets at Grace Presbyterian Church in Water Mill every third Wednesday at 7 p.m., and two groups, one for families and one for peers, that each meet at Stony Brook Southampton Hospital every Thursday at 6:30 p.m.